(As written by Keri’s dog, Charlotte)

In December of 2010, my owner – Keri Blakinger – got arrested with six ounces of heroin during her senior semester of college. Thus, she left me for two years to go to the human pound. (However, I suspect that she still feels guilty about deserting me and so I use my come-hither-and-pet-me eyes to coerce her into extra pets, walks, and table scraps. I have her wrapped around my little paw.) 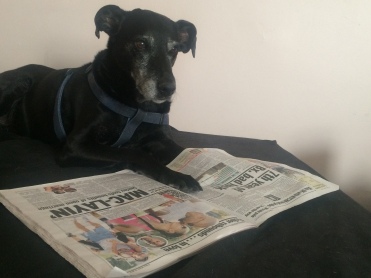 After serving almost two years in county and state correctional facilities, my owner is back on the outside and working as a reporter. After putting in some time at the Ithaca Times and spending a year at The New York Daily News, she picked me up for a horrible, seemingly interminable car trip and we moved cross-country so she could work for The Houston Chronicle through the Hearst fellows program.  Even though I am unhappy about her decision to subject me to 23 hours of driving, I will concede that Keri is still at least moderately awesome because she has a wonderful set of opposable thumbs that I find extremely useful for opening doors to take me out.

Editor’s note: Since Charlotte originally wrote this bio, Keri has since gotten a new job – at a nonprofit news organization called The Marshall Project – but is still based in Houston. Unfortunately, Charlotte is no longer around to update this bio: Here’s what happened.

Leave a Reply. All the cool kids are doing it. Cancel reply